This site uses cookies to provide and improve your shopping experience. By continuing to use this site, you agree to accept these cookies.
For more information, please see our Cookies Page
More Info
Ok
Market Cross Jewellers BlogUncategorizedThe Worlds Wackiest Watches
Menu
Uncategorized

This countdown will show you some of the most weird and wonderful watches that are available today, from the slightly strange to the downright wacky. Hopefully, by the time you’ve finished reading this blog you may want to trade in your old Casio for something a bit more spectacular!

The first watch on our countdown is a by a little known watch company called Devon. You may not have heard of them before now as this is their DEBUT watch and as the name would suggest, the Tread 1 uses a treadmill-esque system with belts that are woven together and have separate motors. The time is highlighted as the numbers feature inside a cut out shape while they’re rotating on the mini treadmill.

As far as durability is concerned, the Tread-1 is made from an almost indestructible polycarbonate which means it’d be perfect if your favoured past-times include bricklaying or being shot at. All of this weirdness does however come at a price, a £9000 price at that. 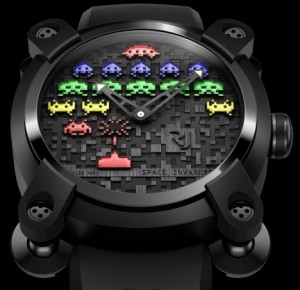 This is most certainly one for the inner-child in you. The levels of nostalgia exuded by this watch may be unbearable to some, but those who can withstand the initial urge to relive the childhood memories will certainly appreciate this fantastic watch. Two versions of this watch are going to be made, one for day (the full colour one), and one for night (with glowing ‘Superluminova’ invaders), with a very limited number of just 78 watches being made Pretty cool, eh!

The price to recapture a piece of your childhood rings in at a fairly hefty £6000.

Some people spend their entire lives trying to stand out from the crowd by getting crazy haircuts or wearing outfits that would make Trinny & Susannah vomit. Thankfully, there is now another way to stand alone from the heard. Nothing says ‘Wow, look how different I am’ quite like carrying a lump of concrete around on your wrist.

Whether or not the designers at Dzmitry Samal were intoxicated when they came up with the idea for this watch is irrelevant, but I’m pretty sure the trend of adorning your wrist with building materials won’t catch on. Nevertheless, this concrete creation has made it onto our list of the wackiest watches and certainly turned a few heads in the office. 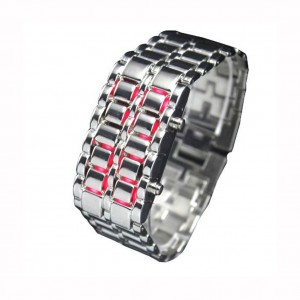 Now this is a weird piece of kit. This watch appears like a simple, chunky man-bracelet at first glance, until you hit the button on the side and activate the lava-red LED numbers. However, the makers claim that it is made from folded stainless steel (like a Samurai Sword) and can “increase its wearers’ strength, dexterity, constitution, intelligence, wisdom, and charisma by as much as 20 points each”. I want one.

Perhaps the wackiest thing about this watch may be the price tag. You wouldn’t be alone in thinking a watch that can practically transform you into a 21st century Samurai Warrior would make you need to re-mortgage you home. Well, you’d be wrong. Very wrong. This potentially life altering timepiece can be yours for just £4.99. That’s less than the price of a large Big Mac meal, amazing! 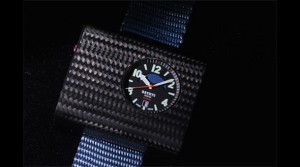 We have reached the final watch on our list of wackiness, and it does not disappoint. Watchmaker John Patterson is charging just £3,500 to hand craft a lucky buyer just 1 of 10 Limited Edition atomic watches, which will be the size of a large matchbox. It contains a laser, a heater, a sealed cavity of caesium gas, a microwave filter, and a photodiode detector. If he manages to get the amount of funding needed, these watches will be completed and distributed by November 2014.

The caesium 133 atom vibrates 9,192,631,770 every second, and by monitoring the number of vibrations the time can be accurately told without the need for radio signals or mechanical parts meaning this watch will be accurate to 1 second every 1000 years. So there will be no excuse to be late for anything ever again.

This will be the first true Atomic Watch in the entire world and will hopefully be the start of an age where super accurate watches will become the norm.